Exaile is a wonderful music player for Linux written in written in Python. It incorporates Handling the library of music. To open tabs on the playlists and have several open lists.. 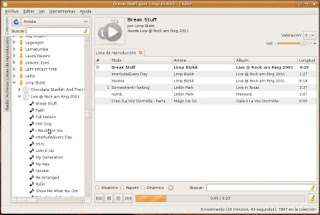 The easiest way to dispose of exaile Ubuntu is updated by adding their repositories.

To add repositories are going to System -> Administration -> Origins of the software -> Third-party software and add the following lines:

deb http://ppa.launchpad.net/exaile-devel/ubuntu intrepid main
Another serious option from the terminal with the following commands:

and add at the end of the document:
deb http://ppa.launchpad.net/exaile-devel/ubuntu intrepid main
Now at the terminal type:
sudo apt-get update
Once you’re done one of two steps and we are going to the terminal: sudo apt-get install exaile
—————————————————————————
The GNU/Linux Advanced Administration: In this ebook “The GNU/Linux Operating System”, the main contents are related with system administration. You will learn how to install and configure several computer services, and how to optimize and synchronize the resources using GNU/Linux.
previousCommands that Should not be run in ubuntu
nextQuick USB Ubuntu 8.04.1 install from Windows (non Persistent)